We offer a full report for determining if your home suffers from Chinese Drywall Syndrome. Our fees start at $250 and would increase if destructive testing is desired and to what extent. We can also perform the inspection for a lower fee if several home owners contract our services to be performed as a group, or one directly after the other.

Recently in the news, are concerns that Chinese drywall is a cause for odors and indoor air quality issues as well as corrosion to wiring and failures of AC equipment. 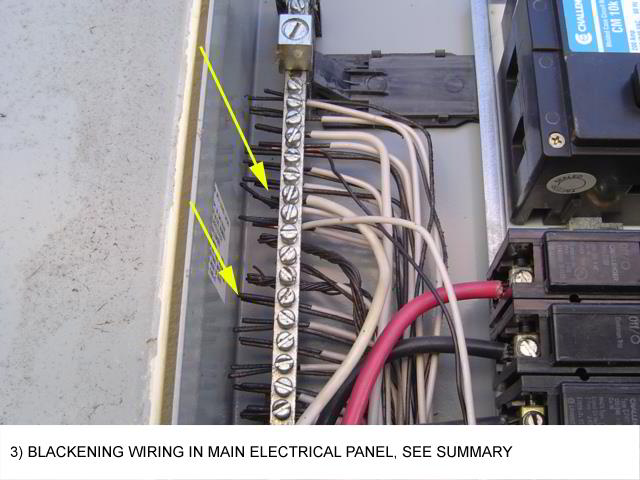 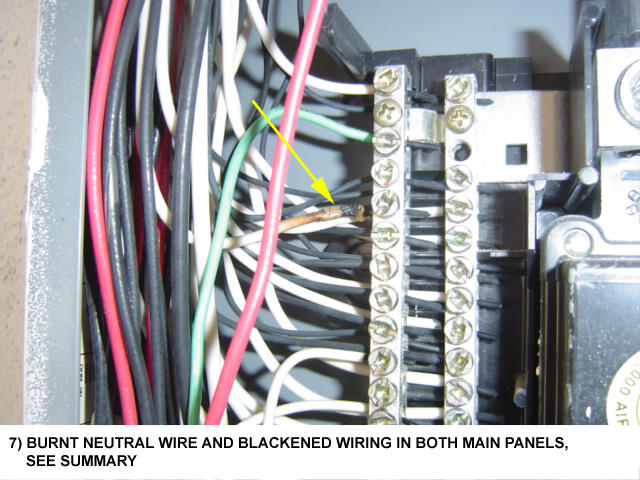 Corrosion of copper wiring (blackening) in the main panels has been a know issue on occasion in some of the homes in our area. See photos above. Also note the difference between chemical corrosion and over heating of the neutral wire in photo #7, where the insulation over heated.

Cause has been, according to the electrical experts, as a lack of grounding of the system or high impedance to ground. It has been my concern that at least part of the cause is due to sulfur and other gases found in the area from a multitude of sources, such as, but definitely not limited to: Normal occurring under ground sources, well water, irrigation water especially reclaimed water, sewer gases from septics and possibly reclaimed land fill areas and now drywall!

Sulfur, now reported in the news in some of the foreign drywall as being the cause for odors and corrosion in the home, can be found in just about all man made products from drywall joint compound, fertilizers, pesticides as well as reclaimed waste water often used for irrigation in some of these newer developments, not to mention well water and septic tanks. Also keep in mind that the only reason it is so news worthy is due to all the product issues such as lead in toys and food products contamination reported over the last few years coming from China. Would this be in the news now if the drywall came from the US? And what about the other new drywall products such as the paperless drywall created and sold as an anti-mold product? According to the MDS Sheets (material data safety sheet) for the paperless drywall, the product can have Calcium Oxide and Sulfur Dioxide in it, but does not indicate how much. Sulfur odor when emanating from the hot water source, is typically due to a deteriorated or damaged anode rod (sacrificial rod to reduce corrosion) in the water heater which has a sulfur core designed to put off this odor to notify the home owner of a problem, so that will hopefully call a plumber.

Let us use some common sense: It just seems strange that if the drywall alone were the cause of these odors, why don't we hear of a lot more homes or virtually all homes between 2003 and 2007 when most of the Chinese drywall was used, as having the odor (estimated in the tens of thousands in our area alone). Why did they not have this odor right away. Typically products "off gas" much more when they are new and reduce off gassing as they age. This is what we call the "New Car" smell. While this drywall may be a contributing cause, it undoubtedly is not the sole cause and is likely triggered by something else or what we call the "effect of a cause". The homes in question all seam to have under ground utilities entering the home, (a source of under ground gases) and most if not all use reclaimed water for irrigation. Particular attention should be payed to the groupings of the homes, since the environment is a likely contributor. Also how do the home owners use their AC system? Do they use it religiously to reduce interior humidity? Contrary to what has been reported by some home inspectors in the news, replacement of ALL the Chinese drywall will likely be unnecessary, after all if you check the material safety data sheets on drywall, they all have or can omit some form of sulfur. Each home suspected to have abnormal corrosion and odor issues, will need to be evaluated on their own terms, taking into account all aspects of the home, contents and underground issues, before determining a plan of action or protocol for remediation of the odor and corrosion issues. This will need to be done by Indoor Air Hygienists (high end mold inspection company, not the cheap guys) and possibly even a chemists or Environmental Engineering Company.

Replacement of suspect drywall may only temporarily correct the problem, if the cause is not fully determined. Bottom line is that sulfur is in all drywall and our environment, air and water. We need to keep in mind the bigger picture and address the causes not just the symptoms!

There is constant information from CPSC and the Florida Department of Health. In fact, the FDH has come up with a case study. there information is listed below, between the red lines:

Case Definition (03-31-09) for Premature Copper Corrosion in Residences Possibly Associated with the Presence of Imported Drywall from China.

First, determine the date of construction.

To meet the current case definition (03-30-09) homes constructed after 2003 (2004 to present) must meet two or more conditions; and those built prior to 2004 must meet three or more of the conditions specified below.

1) There is presence of sulfur-like or other unusual odors.

2) Confirmed presence of Chinese manufactured drywall in the home.

5) Confirmation by an outside expert or professional for the presence of premature copper corrosion on Un-insulated copper wires and/or air conditioner evaporator coils.

The drywall affected is indeed from China from a manufacturer in Germany and is a naturally mined gypsum instead of recovered calcium sulfate from coal-fired power plant spray-dryers. The compound causing the odor is iron disulfide, better know as "iron pyrite or fools gold".

The drywall is releasing these sulfur compounds after more than a year, so this is not a transient event. According to the consultant's toxicologist, measured levels of sulfide compounds inside the test homes did not pose a known risk to human health. (Of course, other compounds could be present for which no tests were conducted.) Release rates seem to go up with higher humidity. This problem can be identified by the blackened copper, and by the age of the homes (all post-Katrina).

The greatest problem is the pitting corrosion of copper piping, (such as HVAC). This corrosion will continue even after the source is removed. By contrast, oxidative corrosion, which is green, protects the underlying copper.

Moisture is also a trigger for the "off gassing" of the sulfur compounds from iron disulfide.

Three key conditions need to be present according to William Spates / Indoor Environmental Technologies Inc. These three conditions are recurring rotten egg like odor, premature corrosion of the AC evaporator coil and The presence of the Chinese drywall. No odor or premature corrosion of the AC coil even with Chinese drywall, are signs that the off gassing is not the cause. Detection of the presence of the contaminates in the drywall is very difficult. While the human nose may detect a smell, the equipment may not be sensitive enough to confirm the cause.